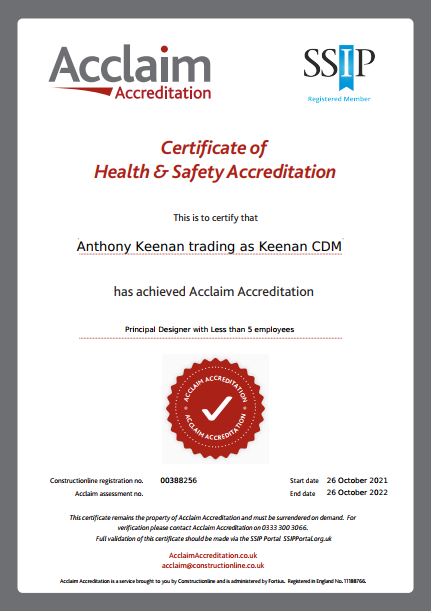 This is achieved via independent assessment annually and enables Keenan CDM to demonstrate compliance with health and safety legislation – in this instance, compliance with the CDM Regulations for the provision of Principal Designer services.

Once again this demonstrates the Keenan CDM commitment to providing a comprehensive service via documented processes in line with the CDM Regulations requirements, in addition to the extensive CPD training undertaken annually.

School and contractor fined for unsafe removal of asbestos https://press.hse.gov.uk/2021/11/29/school-and-contractor-fined-for-unsafe-removal-of-asbestos/

The Working Minds campaign is encouraging employers to manage work-related stress in the same way as physical risks. Sign up to our e-bulletin to keep up to date with the latest news and guidance: https://public.govdelivery.com/accounts/UKHSE/signup/30967?utm_source=twitter&utm_medium=social&utm_campaign=working-minds&utm_content=subscribe #WorkingMinds

Research shows that being in a room with a good flow of fresh air can reduce the risk of infection from airborne COVID particles by up to 70%. Make sure adequate ventilation is a top priority in your workplace. Read our full ventilation guidance here: https://www.hse.gov.uk/coronavirus/equipment-and-machinery/air-conditioning-and-ventilation/index.htm?utm_source=twitter&utm_medium=social&utm_campaign=coronavirus&utm_content=ventilation

This website uses cookies to improve your experience while you navigate through the website. Out of these, the cookies that are categorized as necessary are stored on your browser as they are essential for the working of basic functionalities of the website. We also use third-party cookies that help us analyze and understand how you use this website. These cookies will be stored in your browser only with your consent. You also have the option to opt-out of these cookies. But opting out of some of these cookies may affect your browsing experience.
Necessary Always Enabled
Necessary cookies are absolutely essential for the website to function properly. This category only includes cookies that ensures basic functionalities and security features of the website. These cookies do not store any personal information.
Non-necessary
Any cookies that may not be particularly necessary for the website to function and is used specifically to collect user personal data via analytics, ads, other embedded contents are termed as non-necessary cookies. It is mandatory to procure user consent prior to running these cookies on your website.
SAVE & ACCEPT